Your house has a gable end if you have a sloped roof with a vertical wall that forms a triangle under the end of the roof. 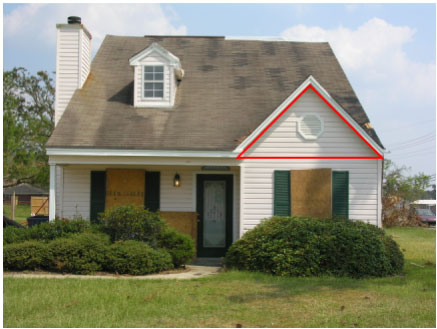 Gable end walls and the roof sheathing at the gable end can take a tremendous beating during a hurricane, and if not properly attached and braced, they fail and cause catastrophic damage to your home. However, of all the possible structural retrofits, gable end walls can be the easiest to strengthen and should be a high priority on your retrofit list. 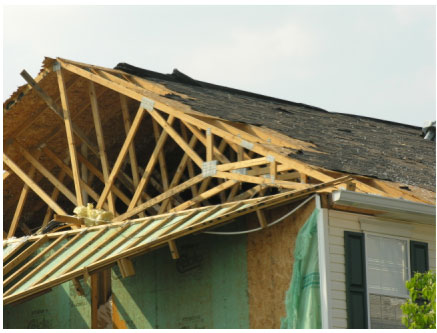 The following actions are recommended to strengthen and properly brace a gable end wall.

The completed gable end bracing, accomplished using the steps outlined below, should look like the light colored framing shown in the picture below. 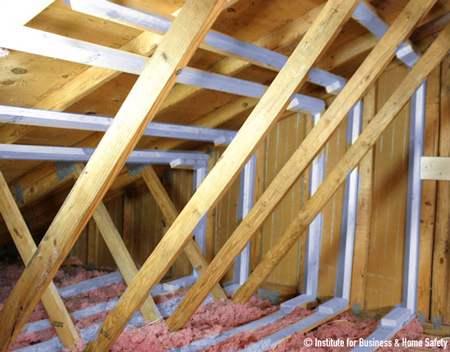 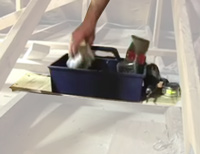 Step 1 : Determine several things about your specific location and the gable end wall on your house.

Step 2 : Install floor braces first (this also gives you more of a surface to walk on.)

Install 2×4 floor braces on the top surface of the ceiling joists or ceiling framing members. This connects the bottom of the gable end wall to the ceiling so that the wall is braced against wind forces that try to pull it away from the house or push it into the attic space.

Use screws to attach the braces because driving nails in could knock loose the drywall ceiling or fixtures below. Use three screws at each connection between the brace and one of the ceiling framing members, and stagger fasteners so they’re not lined up. Repeat at every place the brace crosses a ceiling joist or the bottom cord of the roof truss. Make sure the brace extends across at least three interior joists or trusses to better distribute the force. The brace should extend at least 3″ beyond the joist or truss to prevent splitting of the brace.

Install floor bracing at every existing stud that is longer than 3′. 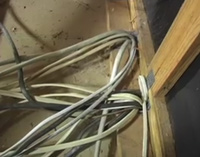 Don’t pinch wires or cables. If you run across something that blocks one of the braces, (see guide for work-around suggestions).

Step 3 : Install bracing to bottom edge of rafters or top chord of trusses.

Hold the brace overhead to mark where screws will be installed, then take the brace down so you can start fasteners before trying to secure them overhead. Make sure the brace goes on the same side of the existing wall stud as the bottom brace.

Step 4 : Install retrofit studs and strapping to reinforce existing wall studs and strengthen connections to the floor and roof braces.

Attach metal strap using the required number of fasteners per strap. Make sure the last fastener is at least 2 ½” away from the end. Install straps at both ends on the same side of the stud in the same direction. (See chart for number of fasteners for installation and length of strapping required per wind speed zones).

Next, attach retrofit studs to the horizontal braces at the top and bottom with the same number of fasteners in the metal strap that were used to attach the strap to the retrofit stud. You may need to move strap to line it up properly with the brace. The strap does not have to be in the middle of the brace, but we recommend a ½” clearance from the edge of the stud. Attach the retrofit stud to the existing stud using 3″ long fasteners at approximately 6″ on center.

Attach compression block at top and bottom of brace, over top of the strap. Make sure screws don’t hit metal strap. Purpose of the compression block is to brace retrofit stud to keep wind forces from pushing in.

Step 5 : Install right angle brackets or fasteners to connect the bottom of the gable end wall to the top of the wall below. 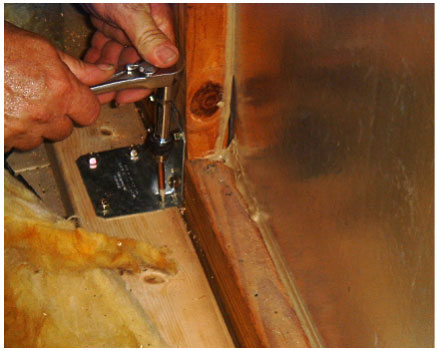